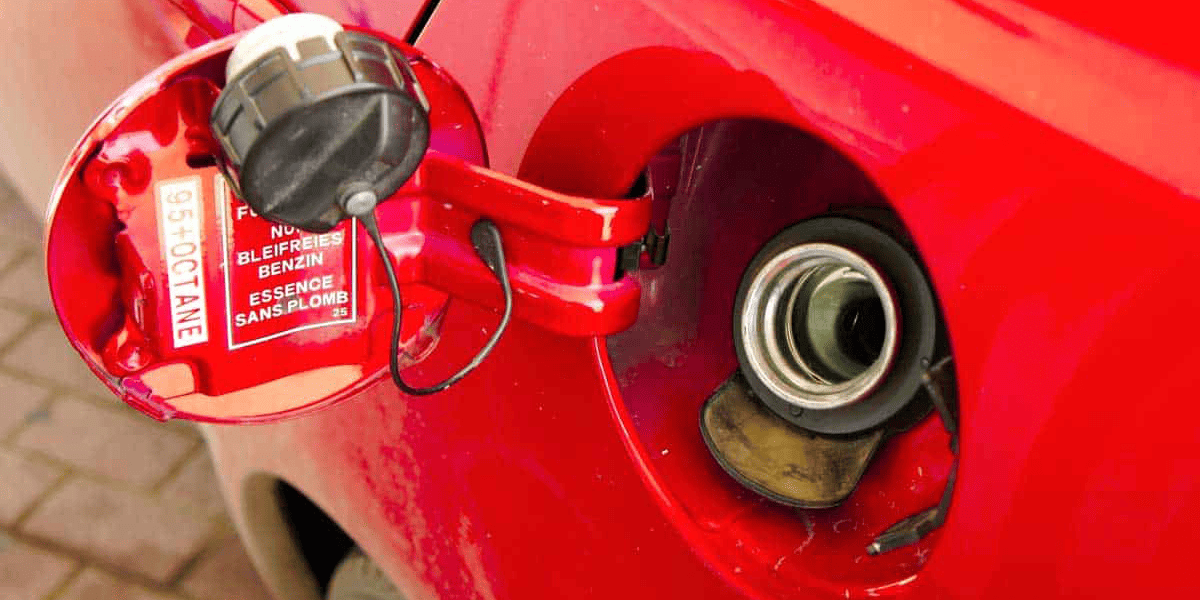 One crucial part of your car is the gas cap, often known as the gasoline filler cap. It sits out of sight, yet it provides a seal that will prevent debris, dirt, and dust from getting into your gas tank. In addition, it plays a part in converting dangerous fuel vapor into something that can be passed via your vehicle’s emission system.

Because you remove the fuel cap each time you fill your gas tank, you can wear the cap, and you end up with a failing gas cap. You quickly find that failing gas caps impact your car’s performance more than you think.

If you spot your check engine light coming on, yet you have no engine issues, it could be just loose gas caps causing the issues. In our guide, you can learn more about quite a few problems bad gas caps can have on modern vehicles.

By the end, you’ll know the answers to, can a bad gas cap cause rough idle, and how you can get the right gas cap from the auto parts store before you end up with fuel leakage problems out of the gas filler cap. (Read Can You Go To Jail For Scratching A Car) 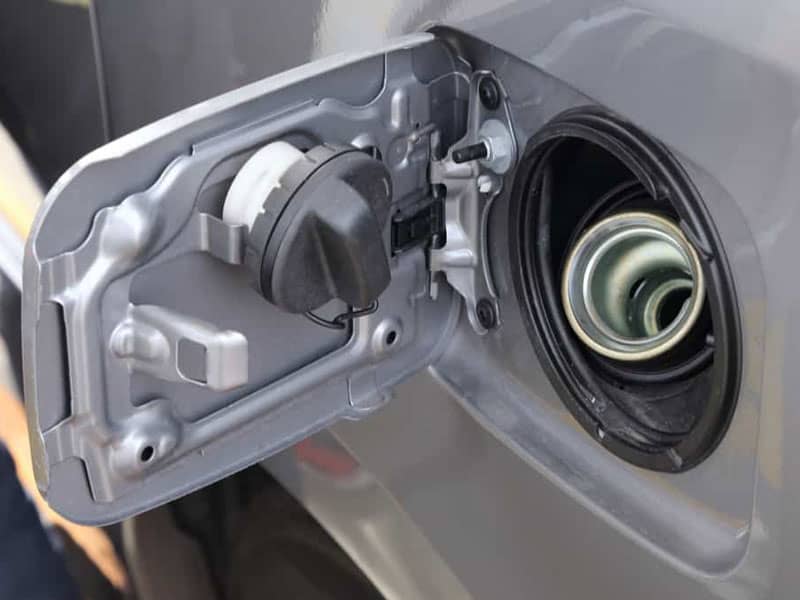 Is a Loose Gas Cap Dangerous?

The “check engine light” on your vehicle may turn on for several causes, such as a loose gas cap.

A cracked or loose gas cap might cause an EVAP (Evaporative Emission Control System) leak because it’s a vital component of the car’s evaporative emission system.

The check engine light will turn on when the computer in your car notices this leak from a failing gas cap.

If the Gas Cap Does Not Tighten

You should hear a clicking sound if the gas cap is tightened correctly. If your gas cap doesn’t click or clicks but pops loose after a while, you might need to replace it as you could smell fuel fumes.

Your vehicle may emit fuel odors because the gas cap seal is worn out or broken, allowing fuel vapors from the gas tank to leak into the filler tank.

The fumes from the leak cause the scent of fuel. Modern vehicles should retain fumes held inside a charcoal canister before being dispersed as your engine runs. (Read Car Temperature Gauge Going Up And Down)

Will a Bad Gas Cap Cause Low Fuel Pressure?

The two codes could also mean a damaged or malfunctioning gas cap, resulting in insufficient pressure in the fuel injection system. Therefore, even if a loose cap doesn’t always cause low fuel pressure, your car’s ECU may report the same fault for both issues.

Can a Faulty Gas Cap Cause Idle Problems?

Most fuel-injected cars employ pressured fuel systems and rely on the gas cap’s tightness to maintain the pressure. Insufficient fuel system pressure is the source of rough idle problems with a bad case cap.

A broken gas cap may allow dirt and impurities to enter the gas tank’s neck and cause idle problems. The impurities get in through a bad gas cap, rough idle in the engine happens as it changes the featured fuel delivery. 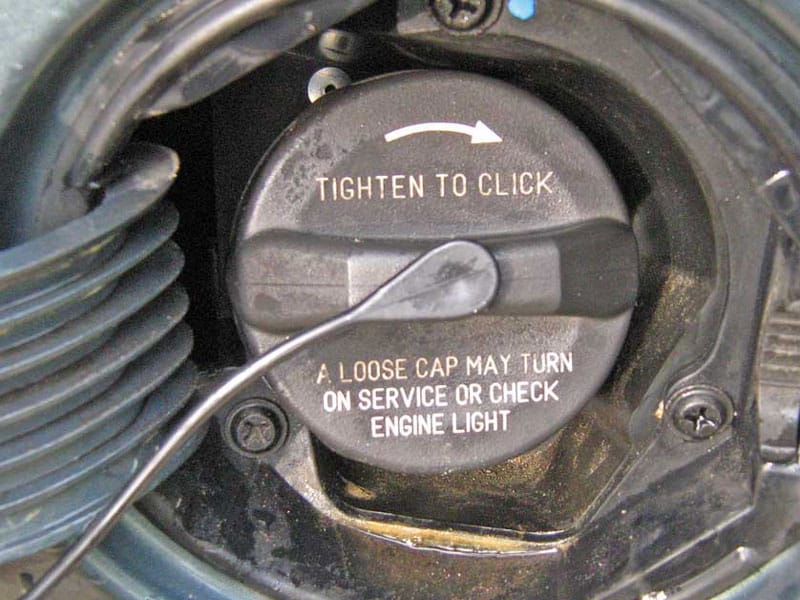 Can a Loose Gas Cap Cause A Misfire?

If the fuel combustion doesn’t occur, your car could misfire or stall. When your air-to-fuel ratio is not optimal, insufficient combustion occurs.

Stalling and misfires are two effects of a faulty gas cap. However, ignition faults, a defective fuel pump, problems with spark plugs, electrical transmission issues, or a faulty air flow sensor are typical reasons for vehicle misfires and stalling.

How to Fix a Loose Gas Cap

Repairing a loose gas cap is a straightforward process. You can solve it by carrying out the steps listed below:

How to Test Gas Cap Pressure

You may need to test the gas cap pressure if your car has sent a faulty gas cap code, but you can’t physically find any leaks despite careful inspection. Using pressure testing or an emissions test, you can eliminate leaks in the fuel system’s more complex areas. (Learn How To Fix Sun Visor In Car)

By performing pressure testing in the manner described below:

Does the Gas Cap Affect the Engine?

Although the gas cap isn’t directly related to your car’s engine, it is essential to prevent gas vapors from entering the fuel system. The engine will eventually run lean if gas vapors may escape from the tank since they can’t produce the balanced internal pressures required to inject fuel.

Doing so means you can decrease fuel economy as the mixture isn’t right, and you’ll need more trips to the gas station.

Can a Vehicle’s Gas Cap Cause Engine Misfires?

A misfire occurs when the engine in your car cannot produce enough combustion to power a cylinder or something that prevents the spark plugs from burning the fuel in sequence, such as a lack of fuel injection pressure. Your engine may abruptly hiccup and lose RPMs because of this.

It’s a clue that something is wrong with the engine and that you need to have it checked even if it misfires just once. A loose gas cap might cause the engine to misfire because it alters the internal pressure in the fuel system.

The fuel injector cannot correctly mix the air and gasoline. If that happens, your vehicle’s engine won’t be able to produce the required fuel combustion to power the cylinders, which could cause your car to misfire. This is possible, but there are a lot of other problems that might make your engine misfire, and you’ll probably notice a bad gas cap code before this happens.

Can a Loose Gas Cap Cause Stalling?

Even though it might make an engine idle poorly, a loose gas cap issue is unlikely to cause an engine to stall. You may see code P0455 for a large EVAP system leak if you get an error. 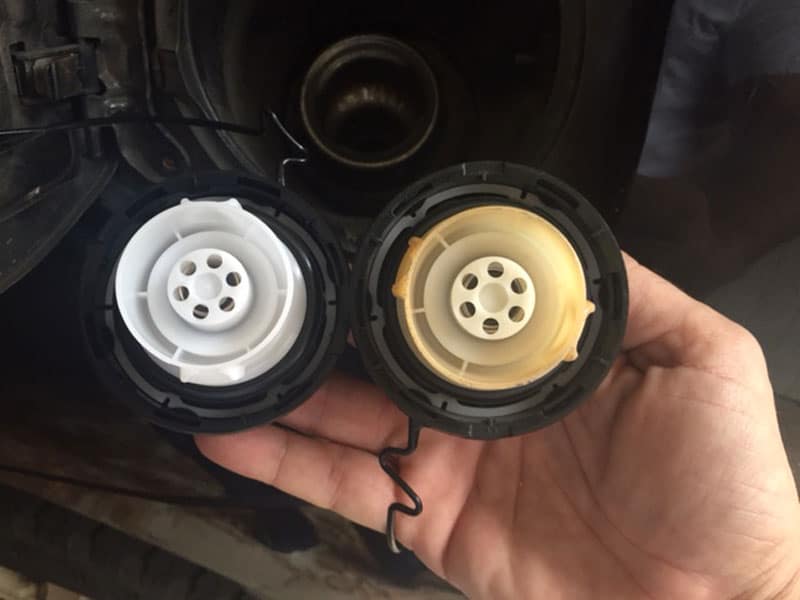 Driving with a faulty gas cap can cause poor fuel economy. Even below its boiling point, gasoline is a highly volatile liquid that quickly turns into a gas. This means that as gasoline rests within your vehicle, it emits vapor.

The fumes from your tank will leak out into the atmosphere if your car’s gas cap is loose or unable to escape a tight seal.

You won’t receive as much value for your money, and it will also affect your vehicle’s fuel pressure regulator to sustain internal pressure in the pressurized fuel systems of new cars.

Does a Loose Gas Cap Cause a Car to Shake?

You’re probably having a rough idle if your vehicle is shuddering. Rough idling is when the engine feels like it is fighting to run as you get close to a stop but gets back up as soon as you press the pedal.

As was already said, a loose gas cap can cause a rough idle in your vehicle, although the same problem can be found with a bad fuel pump.

A loose gas cap may be the culprit if you smell gasoline while driving. If the gas cap is loose, you may smell tank vapors entering the air vents.

A faulty fuel line or blown seal may also be to blame, and your vehicle may leak gas, which is unsafe. We advise you to pull over, check your gas cap, and then head as soon as you can to your neighborhood mechanic to get the seals and gasoline lines checked.

Gasoline fumes can lead to nausea, and disorientation, and cause a crash, as well as air pollution from a damaged gas cap.

How To Reset Check Engine Light After Loose Gas Cap?

How Much Does a Gas Cap Cost?

A gas cap is affordable compared to other parts, but depending on the make and model of your vehicle, the cost can come as a surprise. Gas caps for four-door sedans typically range between $15 and $30.

You’ll additionally shell out about $100 in labor if you have the gas cap changed by a professional. By putting on the gas caps yourself, you can reduce these costs.

How to Fix a Bad Gas Cap?

You may be unsure how to install a new gas cap if replacing your old one.

Here are some helpful guidelines: 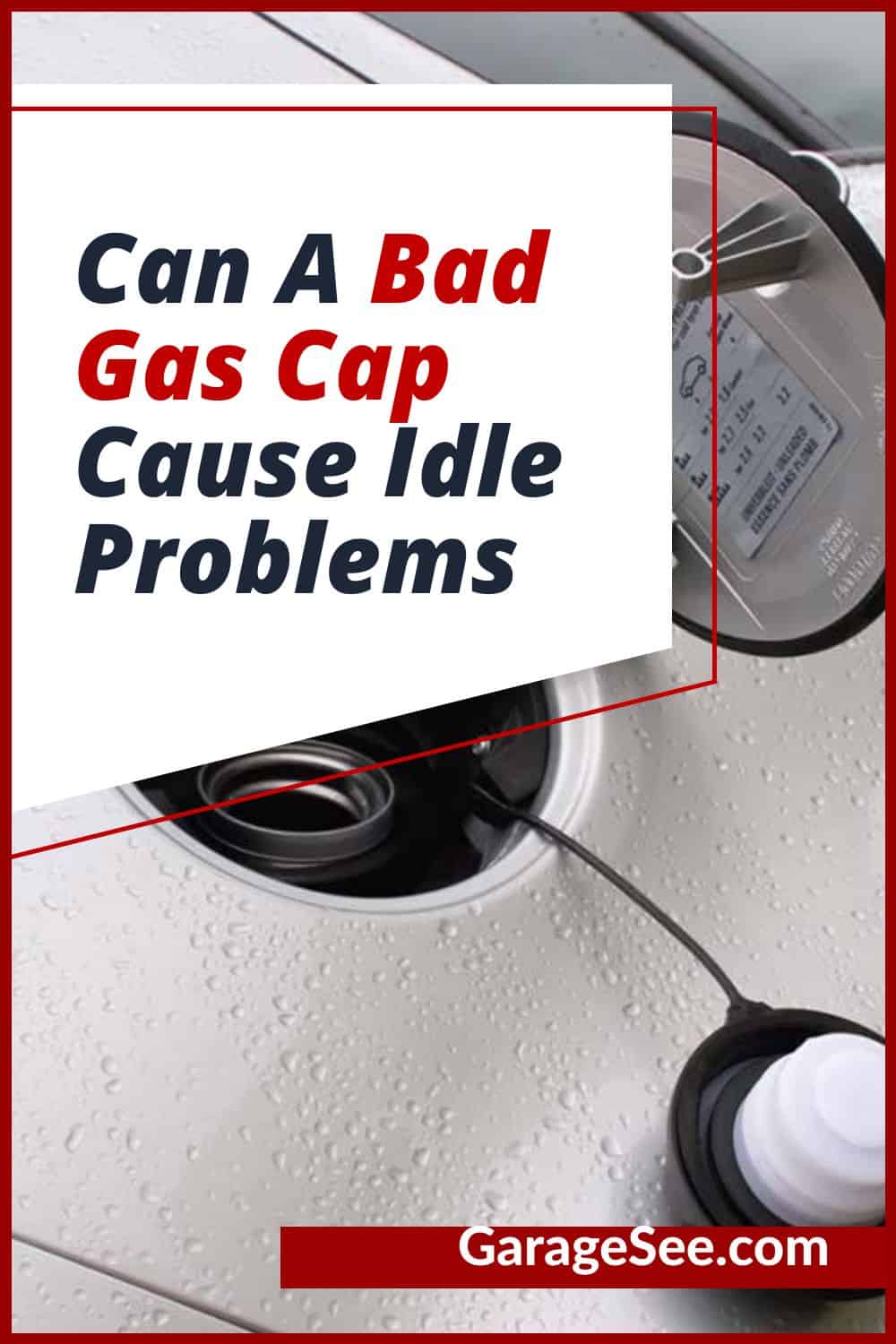